What is App Localization and why does it matter to your business? App localization may not matter to you now, but it may give you ideas to explore for the future of your business. The United States still stands as the world’s largest mobile market as measured in dollars. English is also accepted, more or less, as the international language for business. But, it is expected (per forecasts by Ericsson) that the US will represent a mere ~5% of the 6.1 billion global smartphone users by 2020.

Mobile apps make it possible for anyone, anywhere, to buy virtually anything, anytime from your business. Many services and digital products can be delivered nearly as easily to your neighbors as to a customer halfway around the world. Physical products will require additional logistical efforts to support. Otherwise, there are only three hurdles for your business to do business internationally – Localization, Cost-Benefit and Price Segmentation.

App localization is the translation and adaptation of your app for different languages and cultures. Not everyone speaks English and even then, not with the same fluency. Localization can include all of the following points and more, to convey the right meaning and make the end user feel comfortable and at home with your app.

Reading direction is, obviously, a major issue of app localization for many languages. Localization efforts need to mirror the elements which almost always requires a separate User Interface layout. That increases the development cost to the customer compared to working with the same family of languages. This issue adds UI and UX complexity for languages involving Arabic, Japanese and Mandarin Chinese, etc. Arabic is written from right to left while Japanese and Mandarin are traditionally read from top to bottom and right to left. 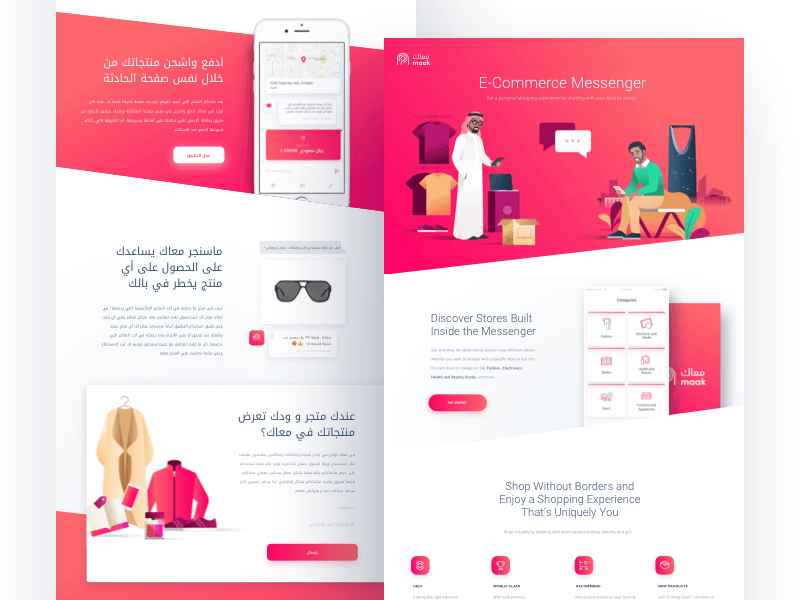 An example of an interface in Arabic. Maak homepage by Matus (Dribbble)

However, knowing in advance that an app will be intended for an international audience can offset some of these costs. One good practice to consider is using a centered alignment for the User Interface. Centering works equally well for all (or most) language sets. With over 6,000 languages on the planet, you will – focus on the ones providing an economy of scale.

Each language and any app localization effort is a business decision with many variables. Design (UI and UX) and Development (Features and Functions) are the core costs of most mobile apps. Most features and functions are likely to remain the same while UI and UX localization costs may vary. Translating an app from English to German mainly impacts the User Interface and is much easier than an app translated from English to Mandarin. These differences significantly impact development costs.

Consider a theoretical example that it cost $150,000 to develop your app for your native English speaking audience – spoken by about 500 million people worldwide. You could expand that audience – adding about 20% more of that base in app localization costs per language to reach:

Let’s take the case of more complex languages like Mandarin, Hindi, Japanese and Arabic which may add 60% each in app localization costs.

Going in this direction could increase your accessibility to potentially 2 billion more people, but for a cost of $360,000. Engaging all of the above languages would run $600,000 while making your app accessible to over 3 billion people – or about 40% of the world’s population.

Obviously, this does not include the cost of marketing and advertising to get your app downloaded by 3 billion people. It merely points to the comparatively very low cost of servicing a large global market with mobile apps localized for each language group.

The bonus is that app localization projects can proceed entirely at your own pace. One could start with a  major dialect of Spanish. Using its revenues, maybe add Portuguese.  Basically, use the revenue from each language expansion to finance the next. Language and country selection can involve a lot of strategy.

Mobile’s Past, Present and Future

It’s appropriate to conclude this discussion app localization with some overarching points on the global mobile market. The US market is seriously focused on recovering jobs – at a time when technology seems to be taking jobs away via AI and automation. Mobile makes it possible for American businesses to expand internationally with far greater ease than ever before and that can easily create jobs and improve profitability, too.

Localizing your mobile app into Mandarin, Hindi, Arabic, and Japanese would run ~$600,000 while making your app accessible to over 3 billion people – or about 40% of the world’s population.

Through 2015 or so, many emerging markets (SE Asia, Middle East, Africa, portions of South America) lacked access to make online payments. Mobile carriers, the major credit card companies, and platforms like Paypal aggressively moved to solve that problem. Still, research each country for how people do business via mobile. You might need to use APIs from different payment processors. It may take time, but developing markets eventually do turn into developed markets. Both Singapore and Hong Kong were relatively undeveloped markets in the 1960’s but both now have a GDP per capita ranking of #3 and #12, respectively.

A proper mobile app strategy requires lots of research and – for some-what may be considered a very significant investment. Of course, you could just develop your app and put it on Google Play and the App Store and be content with that. For any business serious about getting into the mobile market, that’s a starting point to opening up, literally, a world of opportunity.

[…] be looking at Android. Remember that every language in which you intend to launch will involve a localization cost. Localization costs are likely to be lowest for HTML5 […]