Disclaimer: This material is intended for general information purposes only. It’s not legal advice: for that, we suggest you consult legal counsel.

Virtual currencies, including those used for mobile apps, can be very profitable.  Even so, other issues arise when peering into this virtual vault as underscored by our opening questions.  Let’s look before we leap into virtual currencies while focusing on how they are treated under US laws.

Precise statistics are not available, but virtual currencies for mobile apps factor heavily into the $37 billion of global in-app purchases in 2017.  However, all virtual currencies are not created equal. There are three main types which we’ll cover here. Two are taxable, may be subject to licensing requirements and regulations — and their misuse may represent criminal activity.

The world is a complicated place.  We will only focus on U.S. laws, as each country defines and treats virtual currencies differently.  Note that, even in the U.S., each of the 50 states may have its own interpretations and outlooks on virtual currencies, too.  And don’t mistake anything we say as legal advice… that’s what Lawyers are for.

The 3 Kinds of Virtual Currencies for Mobile Apps

The following chart spells out how each of the three main types of virtual currencies for mobile apps works.  It is drawn from the US General Accounting Office “Virtual Economies and Currencies” issued in 2013 as guidance for the Internal Revenue Service for tax purposes. Seeing how they work is easier than defining how they work. 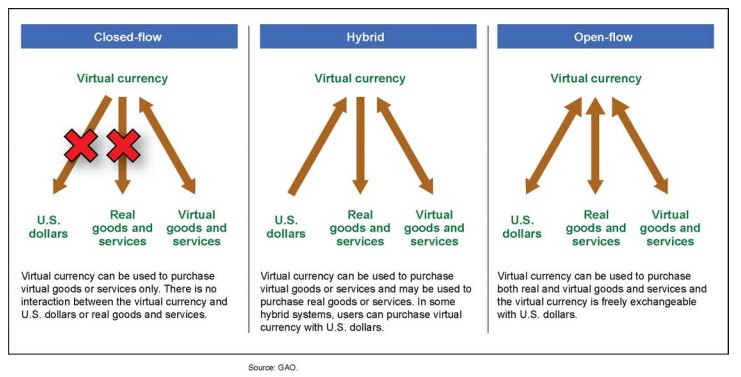 Closed Flow. A good example of a closed-flow virtual currency is Monopoly money. It has no value or usage outside of the game. No one gets taxed. Government agencies don’t regulate it.

Hybrids. Examples encompass most in-app currencies like Candy Crush Saga or World of Warcraft gold. They also include other hybrid currencies used as coupons, customer loyalty points, frequent flyer miles, or Amazon Coins. Hybrid currencies are issued, controlled by and typically only have value to the issuing company and its customers. When the currency is bought or sold for real money, someone is liable for taxes on any profits.

Open Flow. Also known as Convertible Virtual Currencies (CVC), examples include all cryptocurrencies like BitCoin and Etherium, or Linden Dollars as used in the online game, Second Life. Presently, the Internal Revenue Service (IRS) taxes CVCs like property or capital assets. Bitcoin advocates like to argue governments cannot regulate or tax them. But if the IRS so wills, the IRS will find a way.

Money transmission involves accepting a currency and/or substitutes for currency and the transfer of it to another person or location, by any means. Three components are involved:

All three components are required to meet the definition of a money transmitter. A money transmitter is one of several types of regulated financial institutions in the Money Services Business (MSB). The licensing cost to be a money transmitter varies by state, but on average exceeds $175,000 in upfront fees and over $135,000 in yearly renewals. The license is also contingent upon maintaining a minimum capital requirement as stipulated by the state licensor.

Money transmission is inherent to any CVC, but may also be relevant, if unintentionally, to some hybrids. World of Warcraft (WoW) fits this example. That game grew so popular that its in-game currency became the basis for “gold farming.” Peaking between 2008 and 2010, gold farms in China generated $200 million in real dollars at their peak, yearly. Selling WoW Gold is not illegal, but its against Blizzard’s Terms of Service.

All MSB’s, including money transmitters, are required to register and file reports with the Financial Crimes Enforcement Network (FinCEN). This bureau of the US Treasury monitors all MSB’s to safeguard the financial system, combat money laundering and terrorism. How virtual money laundering works is beyond the scope of this article. But transmitting money without a license is a felony under 18 U.S. Code § 1960 – Prohibition of unlicensed money transmitting businesses. Penalties can range up to $250,000 in fines for an individual or $500,000 for a company and up to 5 years in jail.

The Bank Secrecy Act of 1970 (BSA) is an anti-money laundering law (AML), or BSA/AML. It requires financial institutions, including money transmitters, to establish internal anti-money-laundering policies, programs and controls; designate compliance officers; and conduct employee training and testing through independent audits. The BSA is behind why no one likes to withdraw or transfer more than $10,000 at a U.S. bank. In conjunction with the IRS, any person or business receiving more than $10,000 in cash for a single transaction or from a person in a single day must report it with a Form 8300.

Adopting Virtual Currencies for Use with Business Apps

A virtual currency can play a dynamic part in gamifying a business app. You have full control of how the currency works and through your “terms of service.” You can also specify that everything in your ToS is subject to change. But to completely avoid the costs of regulation and penalties for non-compliance, you need to keep all virtual currency in a closed loop – between you and each customer account. That means not allowing your customers or end-users to trade, share, transfer or gift your currency to others.

On the other hand, if you’ve just watched the movie “Ready Player One,” you might have a really big idea and possibly enough real money to back it. One day, someone will come up with a way to unify all gaming environments and possibly all virtual currencies. If that is the case, you might want to get that license to be a money transmitter.

Virtual currencies for mobile apps have been referenced in recent articles about mobile app monetization methods, mobile wallet customer loyalty programs and in the gamification of business apps. Examine what others are doing. There are a lot of great ideas out there that you can bake into your own Minimum Viable Product. But, also seriously take the time to examine all of the requirements.