How Can You Beat Amazon?

When Amazon first came out, few thought it would last.  Now?  Amazon’s in the news every day. The online giant is capturing sales from friends, family, and neighbors of small-business owners.  We believe Amazon is a threat to many small businesses, but we also believe there are several things you can do to beat Amazon, to better compete against… “The Borg.”

Is it really a threat to your business? If so, why?  Is it possible to beat Amazon?  As we recently pointed out,  Amazon assimilated 43% of US online spending in 2016 and over 50% in 2017.     Fortunately, much of what it is doing can be scaled to your business with a mobile app – though that is only part of the equation.

UPDATE: We’ve added the “Mother of All Amazon Infographics” at the end of this article. Extremely large and comprehensive, it helps show what regular retailers are competing against.

Amazon is a Threat to Retailers

Listen closely to Daniel Hurwitz’s argument on Bloomberg. He asserts brand retailers offering value are not threatened by Amazon. Why?  Because they are keeping sales margins by picking up orders canceled by other retailers. More importantly, perhaps, is that 96% of sales are still conducted in stores and not online.

That’s a fair point, except that many retailers are still struggling to compete against Walmart. And Walmart itself is increasingly concerned about Amazon, acquiring Jet.com for $3 billion to better compete online. As the image below shows, Walmart Labs had only 1 API as of September 2015. While walking back early 2016 statements about opening up 2,000 Amazon Go “automated stores” – they’ve raised the stakes for Walmart and all retailers. 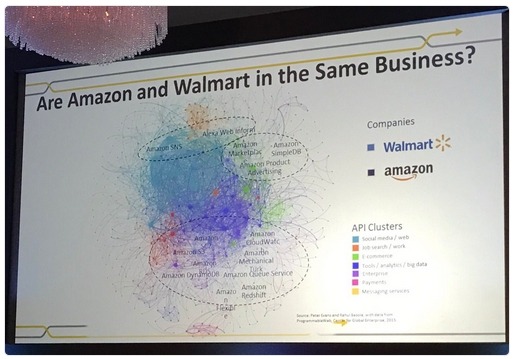 Image from September 2015 where Walmart Labs has only 1 API. Note, however, Walmart acquired Jet.com for about $3 billion to help it better compete online against Amazon.

Six Reasons Why Amazon Is Winning

This article is written from my external observations and my first-hand experience. I worked at Amazon from 2001-2004, starting like everyone in the warehouse and then making it onto their Lexington SNOC, Six Sigma and Safety Teams. Yes, that was over a decade ago. Everything they were doing then – they do better today. Amazon:

These are all very important and many companies do much the same.  Are they beating Amazon?  Mostly not.

They miss the one other thing that gives Amazon such an enormous advantage.

Everyone Can Participate in Amazon’s Business

Over 415,000 websites have participated in Amazon’s affiliate program – essentially as sales agents. It has also attracted more than 2 million third-party sellers responsible for ~47% of Amazon’s total units sold.  How many businesses have 415,000 “sales agents”?

That’s the real magic sauce. They’ve radically redefined the nature of competition by making it easy for everyone, even the smallest of the smallest businesses, to work together.

The only way they can make it that easy for everyone is through software – from their website to its mobile apps to smart home Voice UI systems like Echo.

So, How Can Your Business Beat Amazon?

There’s really four things that you can do to better compete against Amazon. They are the same whether you are looking for massive growth or to simply survive and thrive in your existing local market. That means getting your neighbors and friends to buy from you before they go to Amazon.  They take half of all online sales. In aggregate, half your friends and neighbors are checking out Amazon first.

The fourth step will most likely require investing in a mobile application.  The cost of a mobile app, however, is likely outside the range of affordability for most small businesses, individually. One-Stop Shop Apps for small businesses offer a path forward so you can compete with and beat Amazon locally.

Being able to invest in a mobile app alone is a huge advantage. One Stop Shops represent an opportunity for you to take the lead in your local market by partnering with other suitable businesses. This is all about being able to work together and about what several small businesses could do if they decided to work together.

That’s the #1 lesson we can all learn from Amazon. You may never get 400,000 people around the world promoting your business – but you don’t need to if your goal is to thrive in your local market. What if you could make it easy for 400 or even just 40 people to promote your business?

The Mother of All Amazon Infographics courtesy of 16best.net

Permissions to use this infographic were provided by 16best.net, an online retailer. They deserve credit for an innovative marketing strategy driven by the superb infographics used in their blog.

The Mother of All Amazon Infographics