The fourth leading cause of death globally, Chronic Obstructive Pulmonary Disease (COPD) takes the lives of over 3 million people annually. While COPD cannot be cured, technology is beginning to yield interesting and effective new treatment options and methods. Keeping track of them can be difficult so we’ve compiled a variety of COPD resources to help increase awareness. These include COPD mobile apps, medical devices, and changes to the big picture of healthcare, especially in the United States. We also welcome you to submit additional COPD resources to help reflect the newest treatment options.

What is Chronic Obstructive Pulmonary Disease?

For those unfamiliar with COPD, it’s a group of obstructive lung diseases that make it increasingly difficult to breathe. It is a progressive disease, meaning it worsens over time. It is on the verge of becoming the third leading cause of death in the United States. There are several associated causes, including (but not limited to) smoking, air pollution, and genetics. Some may know COPD better as chronic bronchitis or emphysema. COPD cannot be cured or reversed, but it can be treated.

According to the World Health Organization, Chronic Obstructive Pulmonary Disease was responsible for the deaths of 3.17 million people in 2015 (or 5% of all deaths that year). The American Lung Association estimates that 11 million Americans have been diagnosed with COPD, with many more unknowingly affected by it. Perhaps not the most famous, but certainly one of the most endearing figures taken by COPD was Leonard Nimoy, also known as Spock in the Star Trek TV (and movie) series.

How is COPD Normally Treated?

As we aren’t doctors, it’s best to refer to the Mayo Clinic or the World Health Organization for current COPD treatment options. However, because COPD is most commonly associated with smoking, the first step is smoking cessation guidance and therapy. Stopping the habit is good common sense for everyone. It’s easier said than done because nicotine is just as addictive as heroin.

There are some mobile apps to help you stop smoking. The first is LiveSTRONG MyQUIT Coach. It has a 4.4 rating on the App Store, indicating that most found it helpful. Similarly, Quit Smoking: Cessation Nation has a 4.5 rating on Google Play. They are both free.

There are quite a few COPD-related apps available in the App Store and Google Play. The following represent a few of the newest, most popular and innovative apps to consider downloading.

Supplemental oxygen therapy can be exceedingly important in any Chronic Obstructive Pulmonary Disease treatment program. Portable Oxygen Concentrators (POC) can help those diagnosed with COPD to maintain an active and independent lifestyle. There are quite a few of them available on the market, varying in size, weight, noise level, ease of use, and price. Two of the most popular POC lines come from Caire Medical and Inogen:

Caire Medical makes wearable, portable and stationary oxygen concentrators, including relatively inexpensive Focus and Freestyle models. The Focus weighs in at just 1.75 pounds, but their portable version weighs a hefty 18 pounds. It’s worth comparing all performance metrics relative to your prescription.

Inogen offers a number of portable and stationary oxygen concentrators. Their main models include the portable Inogen One G3 and G4 series concentrators, and they also have a stationary Inogen At Home series. Their models are quite popular, with the G3 weighing 4.8 pounds and the G4 weighing just 2.4 pounds.

Other Portable Oxygen Concentrator Options include:

Make sure to do your research and rely upon trusted vendors. There are many cheaply manufactured models on the market. Cheap models, among other things, can be much difficult to have serviced. Most POCs cost between $2,000 and $4,000, but the expense is eligible for at least partial reimbursement by Medicare and other health insurance policies.

What’s HFCWO? High-Frequency Chest Wall Oscillation, and it works by creating rapid pulses of air into the upper body to create “mini-coughs.” Essentially, the SmartVest helps those with COPD to keep their airways clear of mucus, making it easier to expel phlegm. Studies show that the SmartVest helps reduce pulmonary exacerbations and hospitalizations in Bronchiectasis.

The Right to Try Act signed into law May 30, 2018, offers another chance to terminally ill patients. It allows experimental drugs, devices and biological therapies that have completed Phase I, testing but have not yet approved by the FDA. While previously in effect across 42 states, federal law standardizes it for the entire nation. For this purpose, it could be worthwhile to keep an eye on the COPD Clinical Research Network, which tracks both current and completed COPD-related treatment trials.

The Internet of Medical Things (IoMT)

Many new and incredible treatment options in the field of medicine are under development and gradually making their way into mainstream practice. For one, the computer systems we have today are able to handle so much more data than ever before. A combination of software and hardware makes it possible for physicians to track a patient’s vital signs and other health data in real-time, wherever that patient may be. One example is VisiMobile by Sotera Wireless, for which we were responsible in developing their app that connects to the hardware.

Healthcare providers have been gradually shifting to electronic healthcare records systems as required by the Paperwork Reduction Act of 1995 and the Affordable Care Act of 2010. Healthcare providers that have done so have entered the third stage where EHR systems should begin to deliver major improvements to the nation’s $3.5 trillion healthcare industry. By extension, in 2018 the Department of Health and Human Services started to shift 50% of Medicare and Medicaid reimbursements to value-based payments. The difference is a new standard whereby healthcare providers will be paid more on their ability to keep people healthy and out of hospital beds instead of in them. 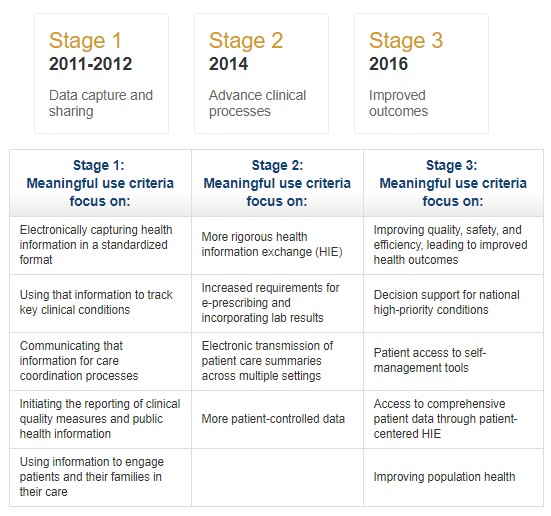 Three stages of meaningful use of EHR Systems – HealthcareIT.gov

Help Us Expand Our COPD Resources

New technology rolls out almost every day, but as we said – it can be hard to keep track of everything. If you know of other COPD resources, we’d be happy to hear of them and add them to this page. We invite you to reach out to us on Twitter, Facebook and LinkedIn with any suggestions you may have – these are direct lines to our editorial team. If you’d like information about Reinvently’s work with COPD*, mHealth and IoMT projects we welcome you to contact our customer support team directly.

* Please note some of our COPD projects are presently covered under non-disclosure agreements.