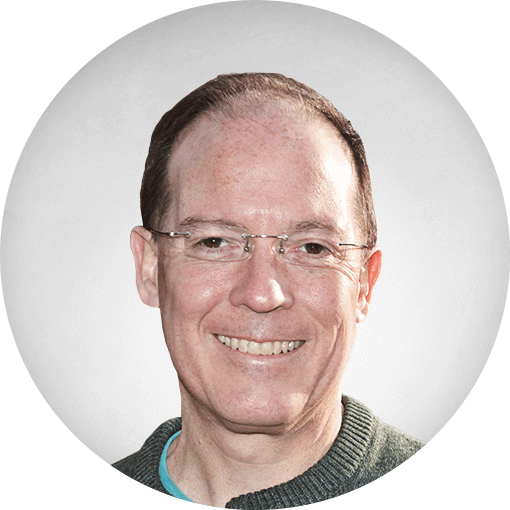 Odds are you’ve probably heard the terms ‘Minimum Viable Product’ or ‘MVP’ before. They’re especially popular in today’s startup scene. There are several good reasons for that: perhaps the most important is learning early what customers want before spending big dollars on things they don’t want. Still, some misconceptions persist as to what an MVP is, and, honestly they can be a little tricky.

Eric Ries, a consultant and writer on startups, originated the concept. As he describes it, “Minimum viable product is that version of a new product which allows a team to collect the maximum amount of validated learning about customers with the least effort.”

A Minimum Viable Product (MVP) uses a development technique where new products only include sufficient features to satisfy early adopters. Only after acquiring feedback from these initial users are other features and options moved into design and development.

Qualifying this further in his book, The Lean Startup: How Today’s Entrepreneurs Use Continuous Innovation to Create Radically Successful Businesses, Ries notes, “We must learn what customers really want, not what they say they want or what we think they should want.” The best way to accomplish this is to get it in front of customers – in their hands if possible – so they can see it, engage with it, and provide feedback (directly or indirectly).

The best way to understand the concept of MVP: imagine it as a MINIMUM LOVABLE PRODUCT.

What an MVP is NOT

You might already be in the process of launching your startup or a new app for your mid-sized business. We understand you want to move fast, and may have worries about funding. You need to resist the urge to rush development, skip processes, or cherry pick data. That requires discipline but can lead to huge dividends faster than you’d expect.

An important part of understanding what a minimum viable product is and how it works is knowing what it isn’t. Let’s clear that up. An MVP is not:

To the extent that MVP means a development technique and a process, your “idea for one” can be just about anything – a product, service, website, mobile application. In business, we are usually talking about ambitious types of projects – from mobile applications to electric cars, VR headsets to 360° full-motion VR machines.

Two things you must know about building your Minimum Viable Product:

Minimum Viable Products aim to maximize the Build-Measure-Learn feedback loop of your “idea” to justify and help prioritize further development. Don’t build features you may not need. Start basic and add complexity only when users ask for it.

High-quality design in both user interface and user experience are intrinsic to MVPs (and really any mobile product). According to Artem Petrov, our CEO, “When it comes to mobile apps, great design is the cornerstone of your product. If the design is bad and not intuitive, the feature set of your product doesn’t matter.” 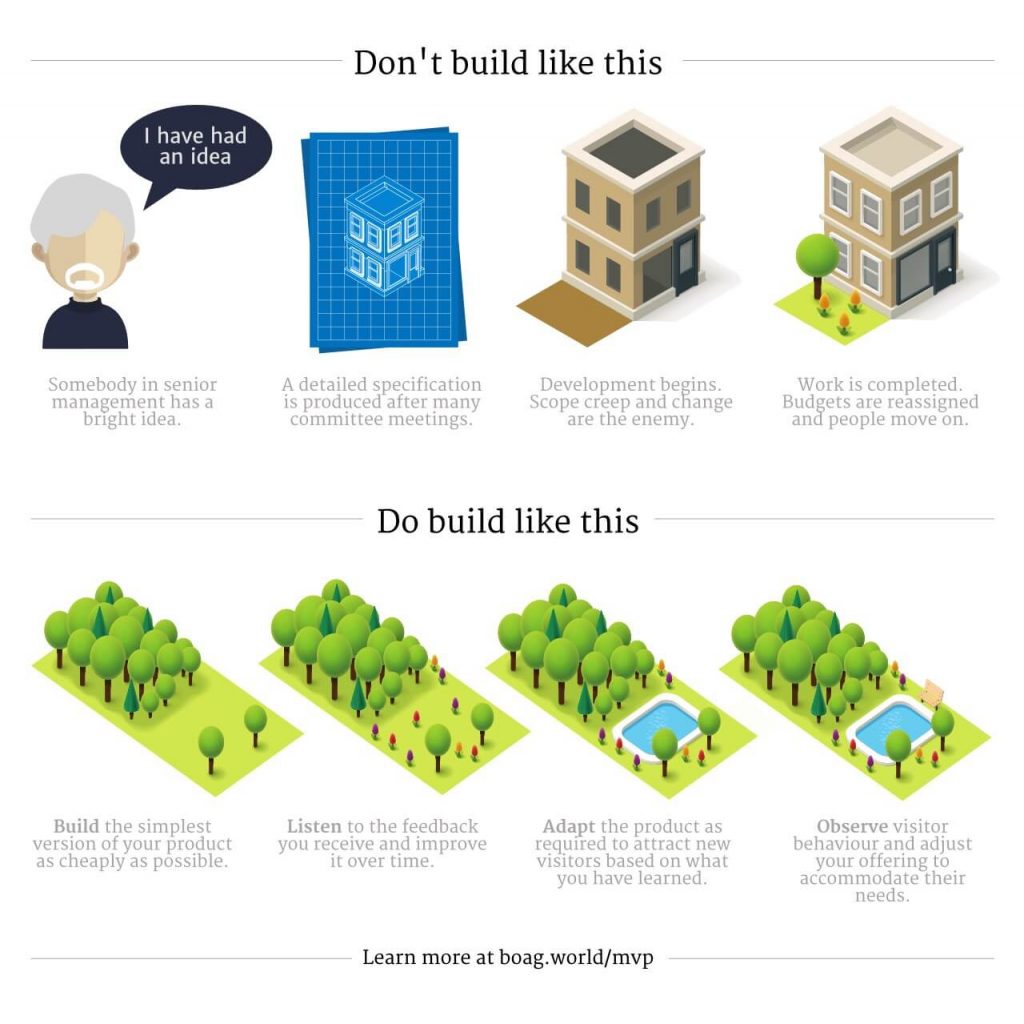 User Interface (UI) and User Experience (UX) directly impact all of your metrics. If people find your app difficult to use, they most likely will not use it – at least not for long.

So, the easiest way to stick to creating an MVP is to ask two questions:

If you answer “No” to either of these two questions, odds are pretty likely that you are not conforming to an MVP-based project. This can lead you to a series of development mistakes including:

Add features only after customers say they want them. Otherwise, you could end up wasting time and money on features they don’t want. That’s time and money better spent on perfecting the one reason why your users would want to use your app in the first place.

In old-school terminology, MVPs could be likened to pilot projects. Ultimately, pilot projects of the 1980s and 90s were a lot like MVPs for answering lots of questions:

Your list of questions should not end there! MVPs aim to provide you with the statistics needed to help you form and guide your development strategy. That’s what we are talking about with an MVP’s first objective: acquiring maximum useful knowledge from customers.

The second part, “least effort,” is sometimes forgotten or misconstrued. This is the trick that makes an MVP effective. “Least effort” can mean different things depending on what you intend to do, but all boil down to one common point. At the risk of confusing acronyms, that common denominator is the Most Valuable Property (or Purpose) – the reason your customers will buy your idea. Odds are, you are on a budget and probably have a deadline. So, if a feature or function is not integral to your #1 objective, it detracts from it. It’s time, money and effort best spent on something else.

Get a consultation with world-class mobile designers and developers to get everything right. 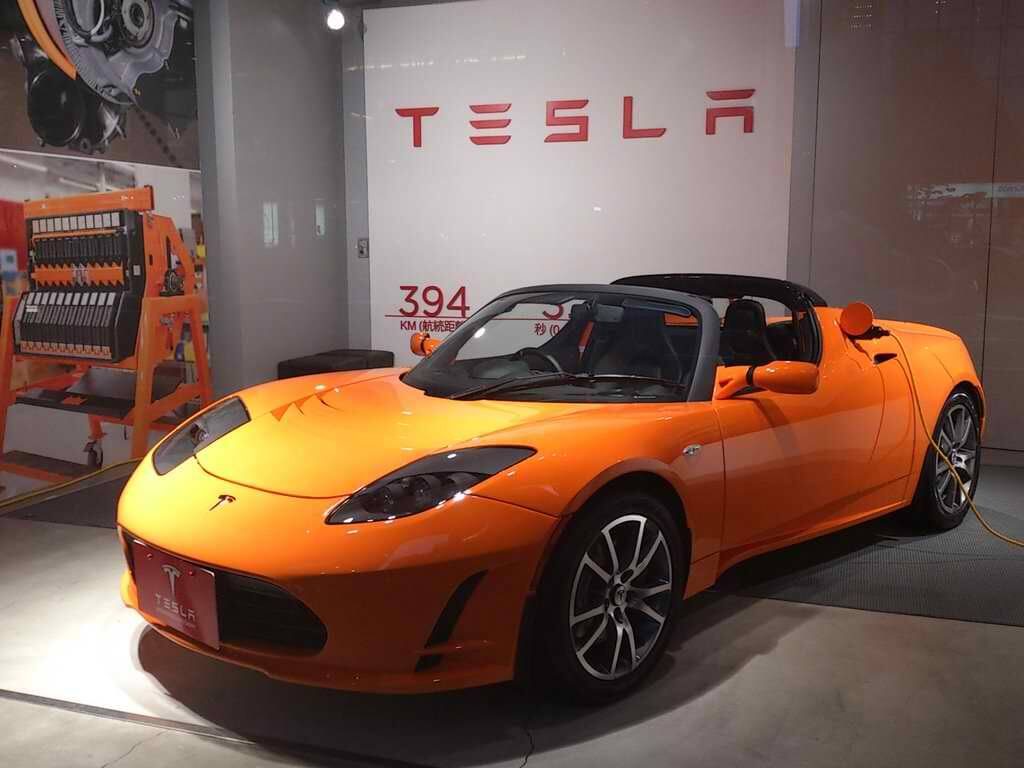 The Tesla Roadster was a very high-end type of MVP. But it worked! Musk’s MVP was a battery-powered vehicle in the same price range (over $100,000) as some Maseratis. The Roadster didn’t strive to compete on style, luxury, speed, or great performance on high-speed turns, just for being able to drive over 200 miles on a single battery charge.

The drive for green, eco-friendly energy is a major market unto itself, but how would people take to a battery-powered car? The only way to really test that, as Musk surmised, was to actually create a battery-operated car. It is safe to say that he generated an enormous amount of feedback from the Roadster.

When your child is sick, few things could be more convenient than having a pediatric nurse pay a visit to your home. Skip the traffic, the waiting room, the chance for catching what everyone else in the waiting room has. That’s the idea behind this mobile application where mHealth meets on-demand, originating with Jon O’Sullivan, founder and CEO of PediaQ, LLC in Dallas, Texas.

Q.care started with a with a minimal set of features to test market acceptance. While meeting a very favorable response from parents, initial testing and feedback indicated they could scale better by also offering it as a White Label product. Large hospital networks and other pediatric services were willing to pay to use it, in order to broaden their own pediatric services.

In some cities, it’s faster, less expensive, and more convenient to ride a bike than get a taxi. Uber might be convenient, but even Uber drivers have to sit in traffic. Swiftmile realized that the electrification of bikes and scooters would spur people to abandon their short car trips at a fast rate. But they also realized that the electric vehicles of the future would all need to be charged. Swiftmile is an on-demand electric charging service for shared bikes and scooters rolling out in San Francisco. As an MVP, it solves one pretty basic problem for people who don’t want to sit in traffic – get a fast and fully-charged bike or scooter when and where they need it.

Swifmile is being picked up by some of the world’s most innovative companies, including the previously mentioned Tesla. They’ve raised $2MM in funding, led by Verizon Ventures. We look forward to telling you more about Swiftmile in the near future!

How to Create Your Minimum Viable Product

Knowing what an MVP is, what it needs to avoid, and having a variety of examples to draw upon, you can set about putting your own Minimum Viable Product into motion. 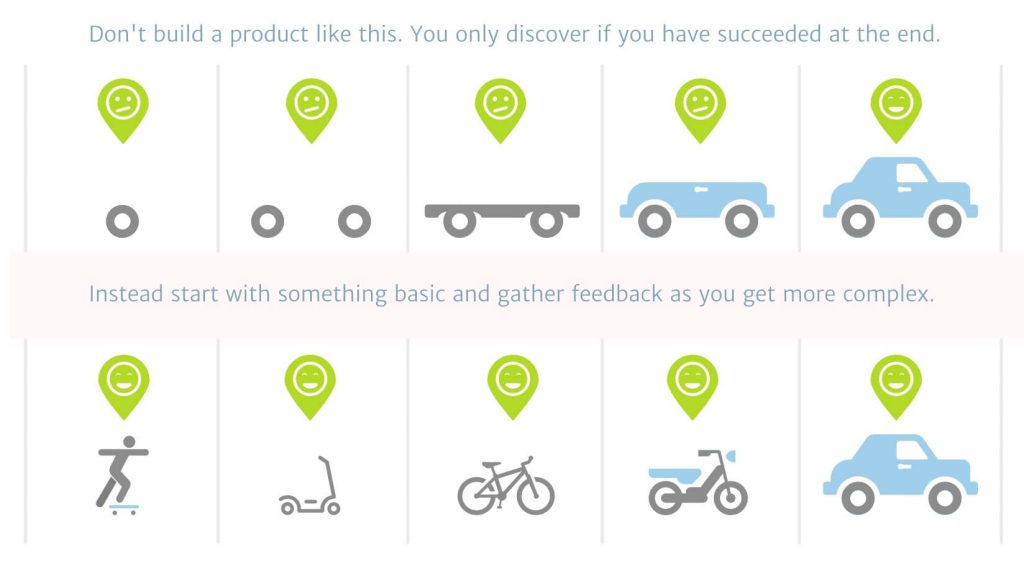 Your MVP might be simple or complex, but its main purpose remains the same: getting the insights you need to grow (or change, or retire) your idea. You do that by putting something tangible directly into the hands of customers.

Want to see more about the MVP Process?

It is also helpful to see how the Minimum Viable Product development process fits into the big picture. Why Startups Fail – A Matter of Process? takes a look at how MVPs launch today compared to how startups launched in 1999 and 2012. The difference is pronounced. MVP-style startups today ask the tough questions first – then try to get funded. This process is far less expensive than asking the tough questions only after you’ve launched!

We Make Great MVPs That Get Funded!

Reinvently has been developing beautiful and smart apps for over eight years. We’re located right in the middle of Palo Alto, California – the heart of Silicon Valley. In addition to our experience, we get to talk to our neighbors very frequently – almost every day. They include lots of startup accelerators, incubators, venture capitalists and loads of other tech companies. We also get to talk with many of the startup founders going through these programs. We hear their success or fail stories, and sometimes share in them when they have us develop their mobile products.

So, if you are in need of a great Minimum Viable Product for your idea – we’d love to hear about your project!

Reply
How to Make Money in the On-Demand Economy | Reinvently

[…] where technology can simplify the interaction between suppliers and consumers? After you find it, build an MVP, test the business idea, collect data, and analyze whether you can beat the competition if you get […]

[…] they had in 2009 is by no means the app they have today. Not even close. Uber started off with an MVP – a development technique where new products only include sufficient features to satisfy […]

[…] If you are in the earliest stages of developing your idea for an app, consider starting with a Minimum Viable Product (MVP). Consequently, focus on supporting the one feature why your end-users would recommend your […]